The Suicide Squad – A Creative Explosion 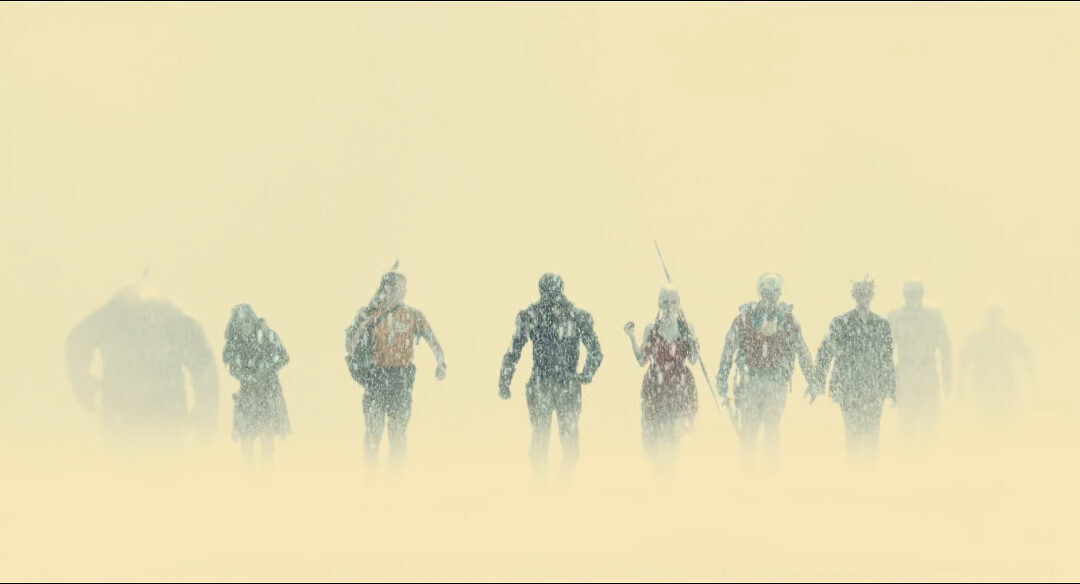 As the credits rolled on Black Widow, I could definitely say that I had a good time watching it, but for some reason I felt that something was missing. I really hate to say this, especially about Marvel’s first female-led film, but it felt a bit generic, at least where the action scenes and villains were involved. An action scene from director Cate Shortland’s previous film, Lore, in which a gun is fired just once, felt a hundred times more impactful than the explosive-laden finale of Black Widow. One of my biggest gripes was that the film had an Oscar-worthy opening sequence that promised a dark and disturbing film, with a director who had deftly handled uncomfortable material in the past, but pulled some of its punches towards the end. I guess that’s how I would describe Black Widow. A good movie that was missing some punch, if that makes any sense.

Who could have guessed that I would find what I was looking for in Black Widow, in James Gunn’s the Suicide Squad. Black Widow felt like a film with a great filmmaker behind it, who wanted to send a message, but was obliged to meet certain standards as a result of her film having the Marvel brand (I’m just assuming, of course). The result was a very well-made and clean film. The Suicide Squad, on the other hand, feels like a studio just handed complete creative control to a director, and as a result we get a film that feels a little messy, a little imperfect, but is just overflowing with creativity and energy. A movie that has no shortage of punch. 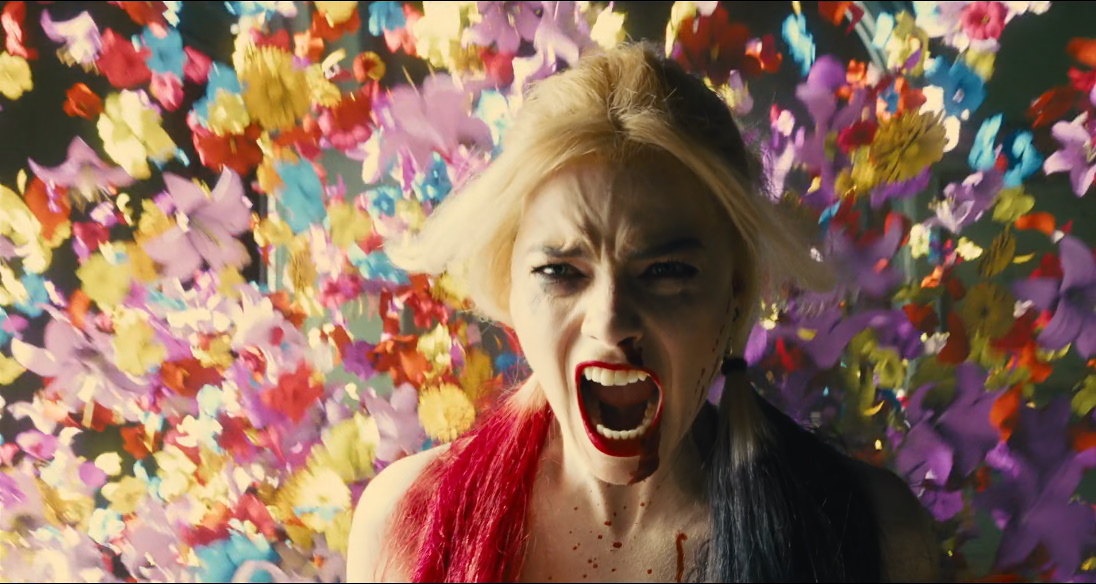 The action scenes flow like a beautiful ballet of blood and bullets. The dialogue is fast and witty, zipping and zapping from character to character. Similar is the camerawork, which is some of the most creative I have ever seen in a film. The camera moves so frantically and precisely at the same time, dashing to frame every single action in the most interesting composition (even if that framing lasts for just a split-second). It is completely unrecognizable for James Gunn’s previous efforts in the Guardians of the Galaxy films, and even more so when compared with the 2016 Suicide Squad film. 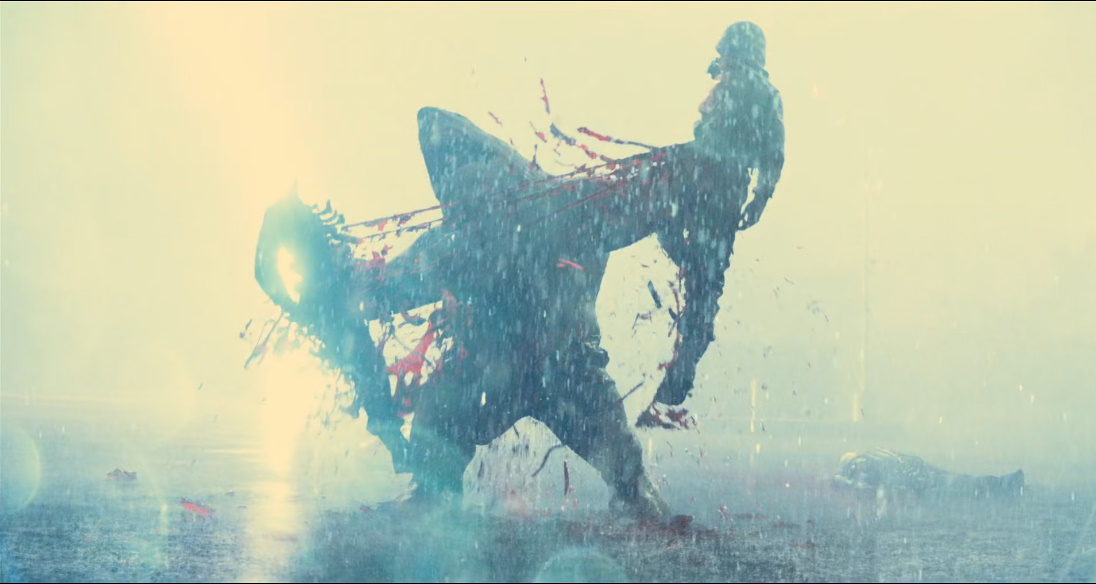 The cast of characters in this film is almost completely different from that of the previous film (technically, this film IS a sequel to the 2016 film). Only 4 cast members (Margot Robbie, Joel Kinneman, Jai Courtney and Viola Davis) return in major roles, and they’re surprisingly consistent with their previous appearance. Other than that, it’s an all-new crew of super-powered misfits, and they are stranger than anything DC has ever put on the big screen so far. There’s Ratcatcher 2 (Daniela Melchior), a young girl with an affinity for controlling rats. Peacemaker (John Cena), a skilled warrior with a toilet-bowl on his head who, in his words, is willing to kill any number of men, women and children in order to keep the peace. King Shark (Steve Agee and Sylvester Stallone), a humanoid megalodon who enjoys chomping on human flesh. And then there’s Polka Dot Man (David Dastmlachian). I think his name probably says it all.

The only person on the team who isn’t a complete freak is the sharpshooter Bloodsport (Idris Elba), who is obviously a replacement for Will Smith’s Deadshot from the first film, going so far as having an identical reason for joining the Suicide Squad (Amanda Waller has his daughter hostage). The daughter subplot is just handled so much better, and feels much more realistic and less emotionally manipulative. 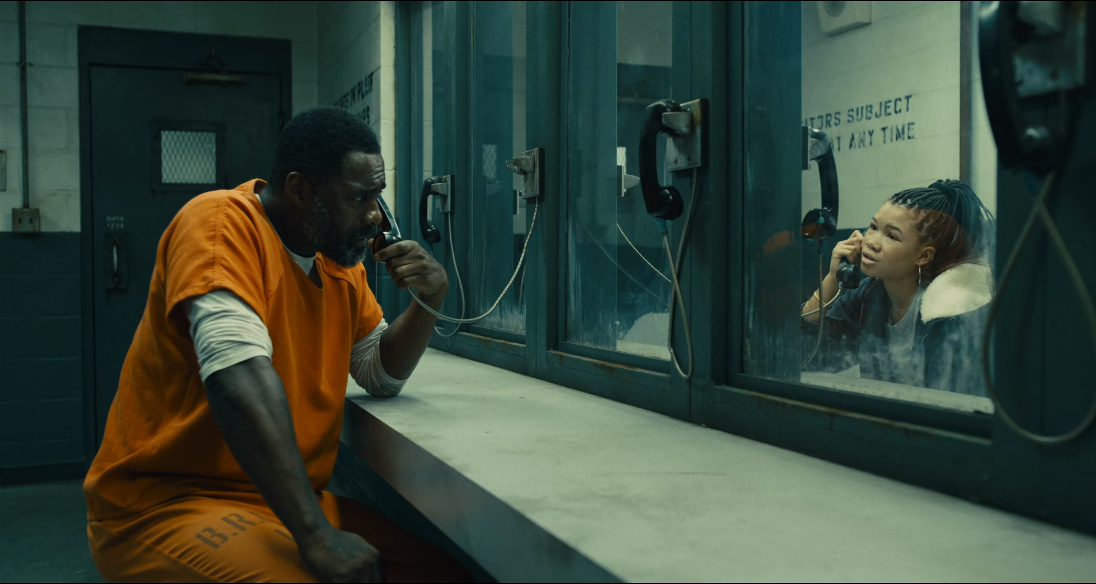 These are people who aren’t necessarily evil bad guys (despite the fact that the first film tried to pretend like they were), just people who have flexible moral standards. The fact that they are all heavily flawed makes them so much more interesting and dynamic. While Bloodsport, Rick Flag and Ratcatcher II aren’t really all that unstable, the rest of the characters genuinely felt unpredictable and I had no idea if they were going to go crazy at any given moment. And there are many surprises in this film, not least of which is how disturbing the subject matter of this fun summer film is.

Warning: Spoilers from here on out. 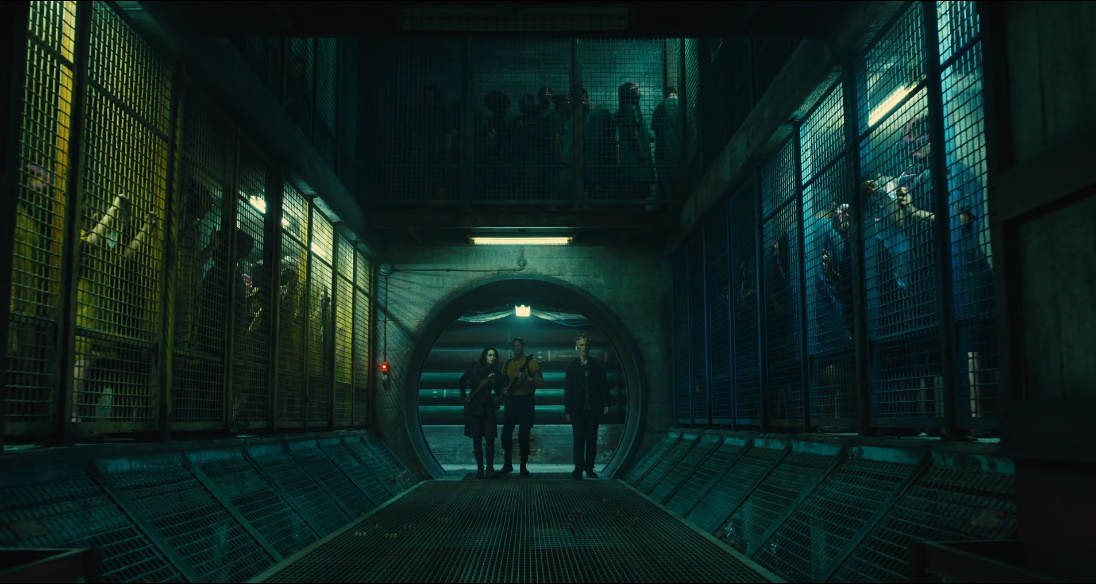 This film, despite its highly cartoonish appearance, doesn’t really have a supervillain. The real bad guys of the movie are power-hungry governments with absolutely no consideration for human life. Government agent Amanda Waller sends the Suicide Squad on a mission to the fictional South American island of Corto Maltese, whose American-friendly dictatorship government has recently been overthrown by a military coup, to be replaced by a regime that does not serve American interests (to say the least). Their mission is not to destroy the new regime, but rather to wipe out a secret research facility located on the island, which supposedly houses a powerful weapon that the American government deems too dangerous to be in anti-American hands.

Of course, this turns out to be a lie. In a twist that is interesting for a superhero film, the true villain of the film is the US government. They were the ones who created the laboratory in order to conduct research experiments so awful that they could not be done on American soil. The name of this experiment is Starro. It’s a gigantic starfish-like alien with the ability to feed on human consciousness. To do this, it attaches hundreds of smaller versions of itself onto humans like parasites, sucking the life force out of their hosts in a similar fashion to the facehuggers in Alien.  It had been harmlessly floating in space before being discovered by American astronauts, several of whom it killed. Instead of tossing him back into space, the government saw potential in its ability. Starro was brought to Corto Maltese where the local government imprisoned it and fed it hundreds of political dissidents (and their families) to grow its power, turning him into a weapon. A dark project that served as a blackhole of human life, tucked away in a little island where no one would care to look. The movie’s R rating (and it really is a very hard R) allows us to see for ourselves the true extent of the horror that occurred within the walls of the facility, and it truly makes the moment even more impactful than it already is. 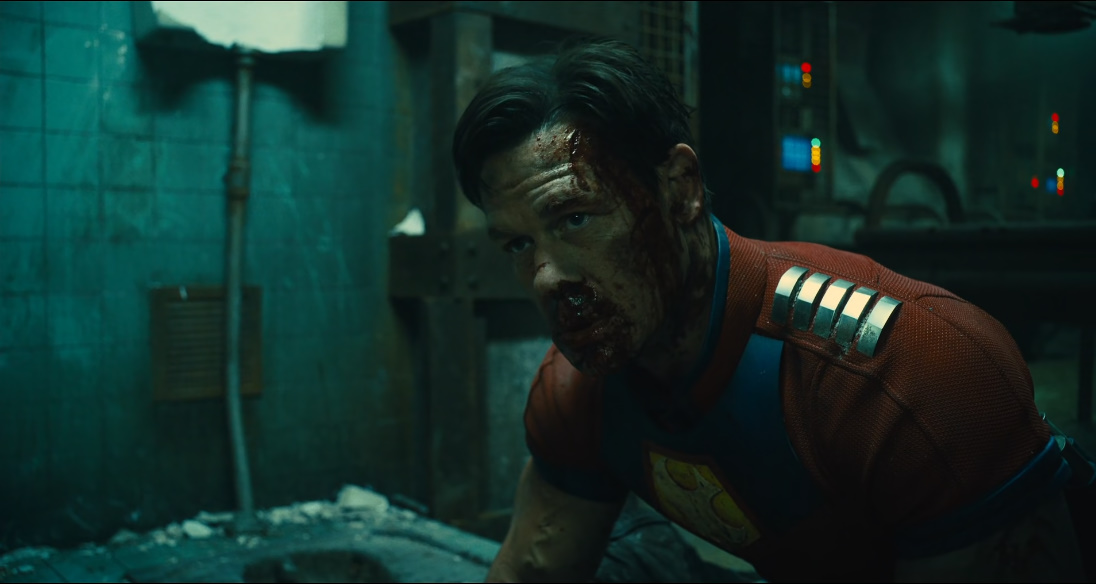 The real mission of the Suicide Squad is not to destroy Starro itself, but to wipe out any evidence of US involvement in such a project. It was a twist that felt suitably effective. The fact that a democratic government would not only tolerate, but support a totalitarian regime by providing it with a means of suppressing its people, is highly disturbing to me. The movie had been mostly great up until this point, but this revelation pushes the climax into overdrive. Rick Flag refuses to continue the mission upon this discovery, and instead rushes to preserve the evidence so he can release it to the public. The Peacemaker, who had so far been more of a comedic character, reveals his true colors as we learn that Amanda Waller had told him of their true mission, and his extreme sense of patriotism pushes him to murder Rick Flag, in the name of peace.

The facility is destroyed, freeing the gigantic starfish monster Starro in the process, who begins rampaging through the city. The Suicide Squad, their mission accomplished, is ordered to leave and not interfere. After all, Amanda Waller has already lost more than a few operatives on this mission, and battling a giant starfish would likely cause more loss of assets. But of course the Suicide Squad, even without Rick Flag, draw the line here. What follows is a spectacular battle that actually feels earned, considering how restrained the movie has been in terms of scale up until the third act. 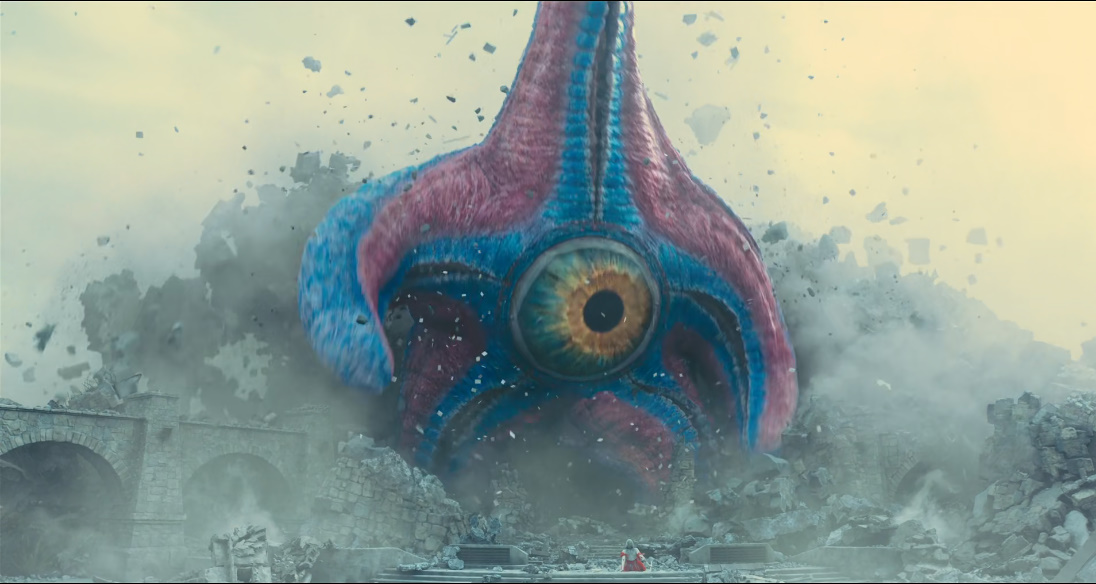 Overall, the Suicide Squad feels like an old summer blockbuster, filled with excellent action but also a few ideas that make you think for a bit. This movie could have almost been the perfect comic book film, save for one problem. The exposition.

Characters in this film have a habit of suddenly opening up and telling their life story when the action dies down. Ratcatcher 2 talks about how her father created the technology to control the rats, only to die from a drug overdose and leaving her to fend for herself on the streets. Bloodsport has a fear of rats, after his abusive father locked him in a closet with a whole heap of hungry rodents for 24 hours. Polka Dot Man’s mother was a scientist who was obsessed with turning her children into superheroes, either killing them or infecting them with a dangerous disease. So traumatized is Polka Dot Man that he sees his mother’s face everywhere, usually in the people he kills. 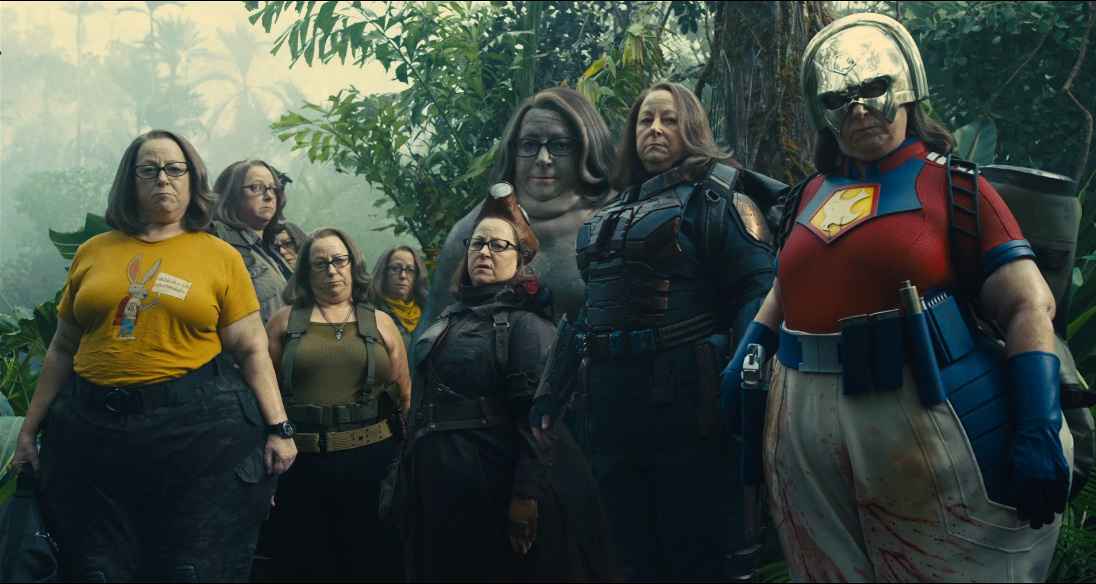 The backstories are all great, and give the characters a lot of depth, but it feels a bit forced when they just directly say them out loud. King Shark barely has any dialogue, and isn’t given any backstory, yet a few simple visual shots communicate his loneliness to us. Bloodsport’s short but tense argument with his daughter already tells us all we need to know about the character’s backstory, and the reason for his fear of rats could have been left to the imagination. Polka Dot Man has one line where he says his mother is everywhere he looks, which is enough to know about his trauma. Neither Rick Flag nor Peacemaker have any backstory provided, yet the strength of their personalities and actions are enough. It’s not a big complaint, but it does sometimes feel like all the character exposition is thrown in at once, as opposed to being doled out slowly and preserving the mystery behind these “heroes”. 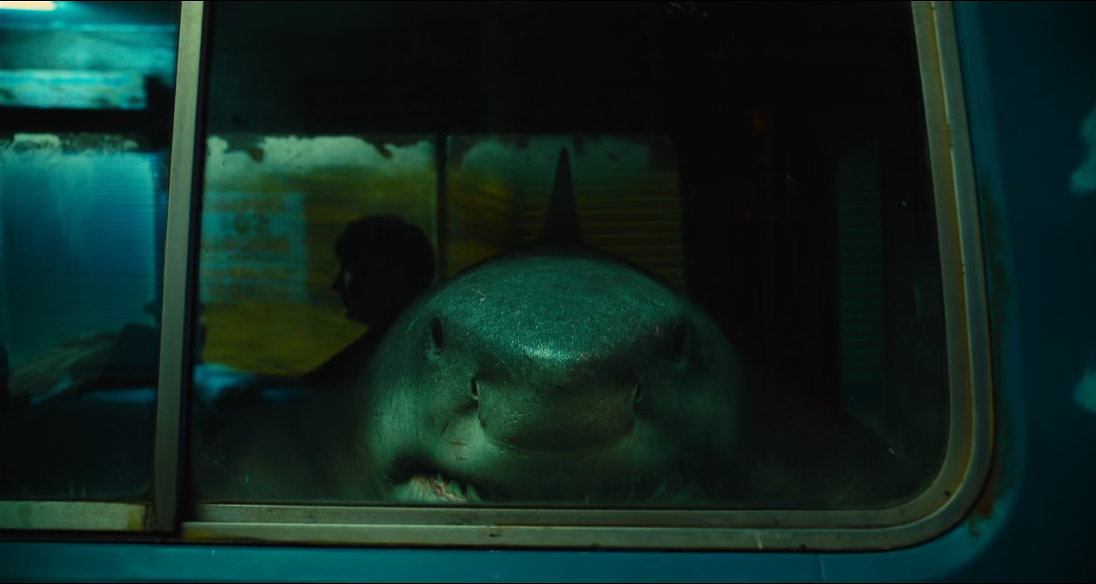 But I guess that’s part of the charm of the film, in some ways. Like I said in the beginning, it’s a bit messy and I can fully understand why people would find it flawed (there’s an entire section of the film dedicated to Harley Quinn falling in love with the new dictator of Corto Maltese before murdering him in the same the day, which drags the pace of the film but I found very entertaining), but for me the film just contains so much flavor that its drowns out these small sour patches that you always find a good glass of punch. 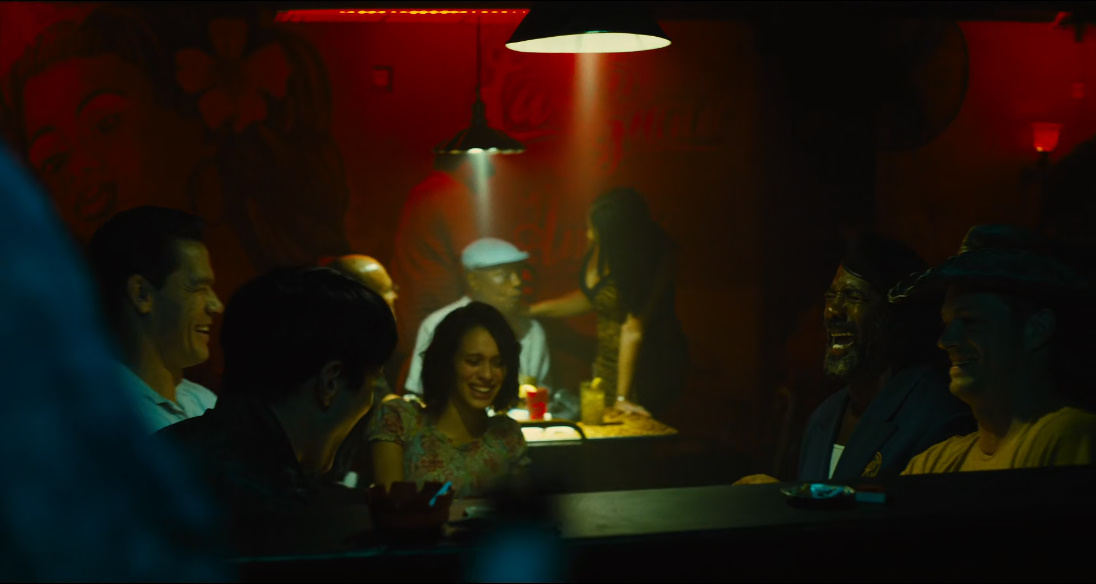