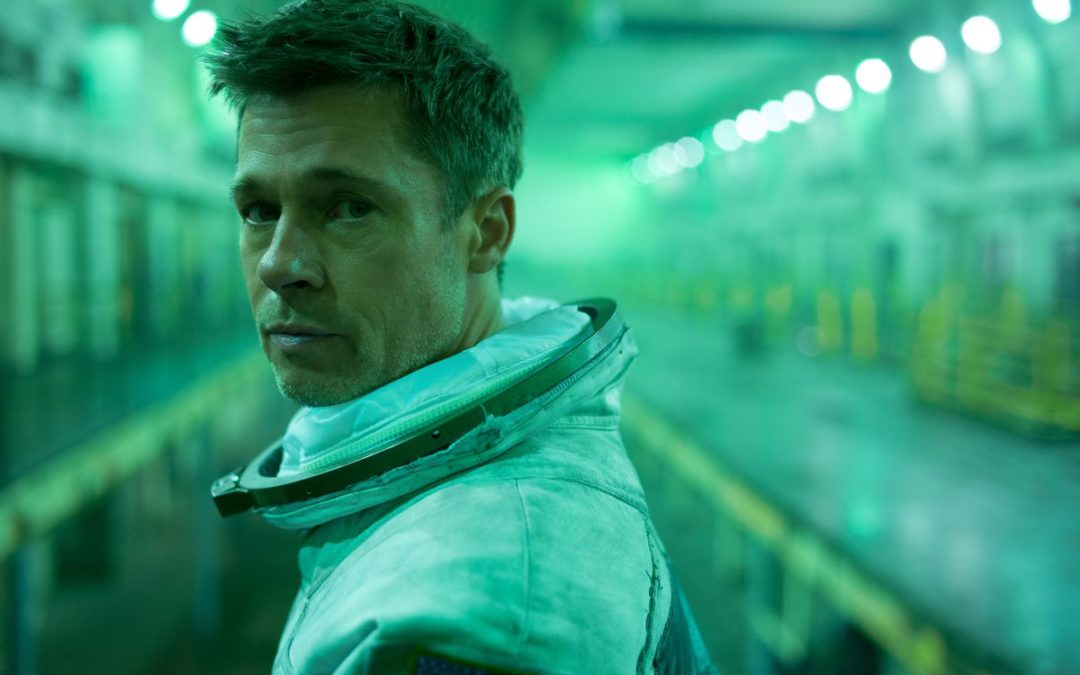 I always wanted to become an astronaut, for the future of mankind and all. At least that’s what I always told myself. I see myself on the outside, smile, present a side. It’s a performance, with my eye on the exit. Always on the exit.

Ad Astra takes us on a journey to both outer space and inner space. It paints a compelling and highly realistic picture of what commercial space travel might be like in the ‘near future’. At the same time, it opens a window into the psyche of Major Roy McBride (Brad Pitt), a withdrawn, world-weary and emotionally stunted astronaut who comes with a whole lot of baggage, despite the stoic and unflappable demeanor he initially projects.

All throughout the movie, Roy narrates his emotional state in a dreamlike and stilted manner, almost as if he were an unaffected, third-party observer. He is at his happiest and most relaxed when working on the International Space Antenna, high above the earth at the edge of the stratosphere, isolated from all human contact. This is a theme that the movie returns to again and again – the idea of escaping to the stars as a way to avoid the messy entanglements that come with being human. This same rationale may have driven Roy’s father, decorated ‘hero’ astronaut Clifford McBride, to leave his family behind and undertake an ill-fated mission called the Lima Project, which had been tasked to find signs of intelligent life in the universe.

In a gripping opening sequence, the International Space Antenna is badly damaged by mysterious power surges caused by the release of anti-gravity matter from Neptune’s vicinity. Roy survives a spectacular and pulse-racing fall from the disintegrating antenna structure after it’s hit by resulting electrical storms. Upon recovery, he is notified of his next mission – to travel to Mars in an attempt to contact his father, whom he has long believed to be dead, and to play upon their father-son bond to get him to stop the destruction on Earth.

Despite his doubts, Roy navigates all sorts of perilous twists and turns as he doggedly completes his mission. This includes outgunning space pirates in a thrilling (albeit unexpected) moon buggy chase, fighting off crazed primates in response to a mayday call and breaking into a ship bound for Neptune just a few seconds before lift-off. Where most people might back off or freeze in panic, Roy does what he has to do out of a deadpan sense of duty. He succeeds in everything he does despite appearing reluctant to get involved at all. In this sense, he evokes the ‘strong but silent’ persona from the early age of space exploration, when fathers were seen as remote and unknowable providers rather than warm and accessible nurturers.

Once he arrives on Mars,  Roy gets two chances to transmit a message to his father. The first time, he rattles off the official verbiage supplied by NASA and gets no response. The second time, he goes off script and makes a spontaneous, heartfelt appeal as a son. This is the first time that his emotions visibly go haywire and his famously steady heartbeat surpasses 100 instead of the usual 80. Space Command promptly announces to Roy that his personal connection with Clifford has rendered him unsuitable for the mission and they were sending him back to Earth immediately.

During his subsequent confinement in a “comfort” room, Roy is visited by Director Helen Lantos (Ruth Negga), who reveals that her parents were crew members of the Lima Project who had perished at the hands of Colonel Clifford McBride. Fearing that Space Command was withholding the whole truth from them, Roy decides that he has to confront his father and Helen agrees to help smuggle him onto the Cepheus, the ship that had been commissioned to destroy all remnants of the Lima Project.

Against all odds, Roy embarks on a solo, 79-day journey to Neptune, during which he experiences the troubling effects of prolonged isolation. When the longed-for reunion between father and son finally takes place, Clifford acts in an almost nonchalant manner and Roy gives an equally flippant response. Clifford mainly comments on how Roy’s grit and determination would’ve made him the ideal partner in his lifelong quest for alien life. When he finally expresses regret, it’s at the missed opportunity to achieve his goals together with his son, rather than at his emotional abandonment of his family. Despite this, Roy tells his father that he still loves him and even successfully convinces him to go back to Earth  with him.

Ad Astra is a thought-provoking, bittersweet and philosophical space adventure that ends on an optimistic note. Despite the lavish and breathtaking visuals and the capable support of co-stars Donald Sutherland, Tommy Lee Jones and Ruth Negga, the movie rests solely on the brooding shoulders and melancholy blue eyes of Brad Pitt, who gives one of his best performances ever. You’ll leave wanting to commit some of the best quotes from the movie to memory, such as the one below which sums up Roy’s determination to avoid his father’s fate and to try becoming fully human for a change.

I’m attentive. I am focused on the essentials, to the exclusion of all else. I’m unsure of the future, but I’m not concerned. I will rely on those closest to me, and I will share their burdens, as they share mine. I will live and love. Submit.